William Sevenoke and the Myth of Agincourt 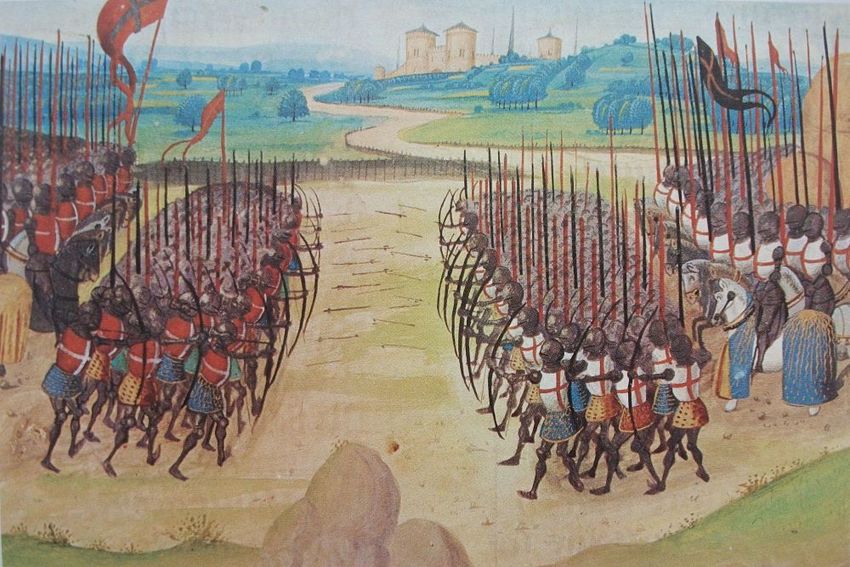 Sunday 25th October this year marked the 600th anniversary of the Battle of Agincourt when the English forces under Henry V defeated those of the French in the conflict known as the Hundred Years’ War. Over the centuries a myth has prevailed in the Sevenoaks School traditions that its founder, William Sevenoke, fought at the Battle, even engaging in singlehanded combat with the French Dauphin.

The belief stems from a poem of 1592 written by the romantic poet Richard Johnson, The Nine Worthies:
In time my prentice years were quite expired,
And then Bellona in my homely breast,
My country’s honour with her flames had fired,
And for a soldier made my fortune prest,
Henry the Fifth my king did war with France,
Then I with him his right to readvance…

Sevenoke goes on to tell of an encounter he had with “the Dolphyne” who came across the former resting; on the French prince calling him a “lazy swine” he responded by giving him “such a blow as warmed his courage” and they fought “ till he [the Dauphin] was breathless”.  So impressed was the latter by Sevenoke’s fighting prowess that “a bag of crowns to me he cast…[and] said to me, Sevenoke, be proud the Dolphyne fought with thee”.

Sadly it is a tale which has no basis in truth – logistically, personally, factually the encounter could not have taken place.

The English army arrived in France in August 1415, successfully besieged Harfleur before Agincourt, and returned home by 16th November. During this time William Sevenoke was engaged in a busy professional life in the City both as an individual Grocer and merchant, but also as a member of the City’s political elite. He had been admitted as a Freeman to the City in 1394; thereafter he is mentioned each year until 1426 in both national and local documentary sources in his capacity as a merchant, Citizen, magistrate, parish and ward representative and property transactor, culminating in his Mayoralty of 1418 - 1419.

Moreover, in 1415 William Sevenoke was aged around 40 years. Not exactly in his dotage, even by the life expectancy standards of the Middle Ages, but certainly a point when a man’s prime had begun to wane. Unlikely, therefore, that he would be considered as a useful member of any army especially if he had not fought in one before.

Aside from such general arguments, the most conclusive evidence as to why William Sevenoke cannot have fought at Agincourt is his named presence at the Guildhall on 13th October 1415 for the election of Nicholas Wotton as the new Lord Mayor. He was presumably part of the City crowd which included “Mayor, Aldermen and Commonalty…[who] went like pilgrims on foot” to Westminster Abbey to give thanks for the victory in France on 29th October. Sevenoke was Alderman of Tower Ward between 1414 – 1426.

It is also worth pointing out that the Dauphin himself was not present at the Battle either, remaining with his father, Charles VI, at Rouen.

However, William Sevenoke did support Henry V’s French wars in other ways. In 1417 when Henry V returned to France for the Siege of Caen, Sevenoke personally loaned him £100; shortly afterwards along with other merchants he loaned another sum for which a royal sword “garnished with gold…worth 2000 pounds” was pledged as security.

Whilst Lord Mayor Sevenoke responded to Henry V’s plea for help during the 1418 Siege of Rouen, posting a proclamation in the City asking that:
“Wine, ale, beer, fish, flesh or any other manner vital…to refreshing of the King’s host…let him in all haste between this and the foresaid Sunday come to William Sevenoke…unto the church of St Dunstan’s in the East…and there declare unto him certain quantity of their vital and they shall assign and dispose him ready shipping for her passage...”.

The following year, having stepped down from the mayoralty in favour of ‘Dick’ Whittington, he found himself responsible for carrying out another proclamation that asked for troop reinforcements:
“all manner men that will toward the coasts of Normandy…let him array and make him ready in the best wise that they can or may in all haste and come to Saint Dunstan’s in the East on Monday that next cometh at 8 of the clock to William Sevenoke, Alderman… and they shall be assigned ready shipping and passage…”.

Henry V’s expressed his gratitude for Sevenoke’s effort in a letter he wrote to him in 1419:  “trusty and well beloved. We greet you well and we thank you with all our heart of your goodwill and service that we have always found in ...”.

It is intriguing to wonder how the legend of William Sevenoke’s presence at Agincourt arose and why Richard Johnson chose him as one of only “nine worthies”. Was there a basis for it lost or unrecorded in annals of the time which was passed down and distorted by the vagaries of oral history? The school’s historians have all been of the opinion that while the tale should be treated with scepticism its very existence is enough to demonstrate the high level of William Sevenoke’s personal and public status.