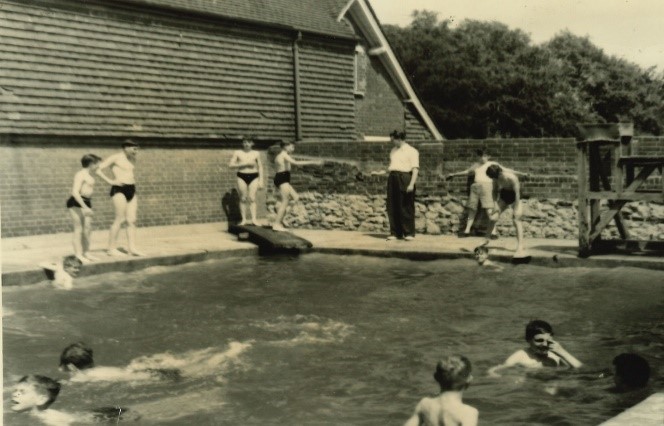 Whenever OS visit Sevenoaks School for reunions the one place that they all invariably ask to see on their tours round the campus is the swimming pool. Not the watery expanse inside the Sennocke Centre with its competition lanes but rather the derelict site hidden away behind fencing at the rear of the Cottage Block. It has held fond memories for generations of alumni - OS revisiting on Speech Day as early as the 1920s would head straight for it after their annual Old Boys cricket match and “the more hardy of the members had a dip in the school baths which had…been filled with fresh water, while the less venturesome were content to look on”.

Swimming as an activity began as an informal summer pursuit in natural surroundings; by the end of the nineteenth century it was an organised sport with newly created technical paraphernalia such as diving boards, changing huts and, of course, a purpose-built pool. In Sevenoaks, the first Open Air Swimming Pool was built in the 1870s at Greatness to replace the original bathing area  – the mill pond. It was a sport which quickly found a place in the Games schedules of late nineteenth century public schools because it exactly reflected the aim of their headmasters to be seen as enlightened persons and their schools as civilised and civilising institutions through not only  an exercise of social control and varied curriculums but also in the cult of athleticism.

Sevenoaks Headmaster Daniel Birkett flagged up the need for a swimming bath as early as 1878 on his appointment when he presented the Governors with a list of ‘eleven wishes’ he considered necessary for bringing the school up to First Grade status. Finances prevented its building on this occasion and it was left to Birkett’s successor, George Heslop, on his appointment in 1898 to emphasise again the need for the school to have its own swimming pool.

The £800 needed to build it was partly funded by gifts from Governors WJ Thompson and Lord Hillingdon, money raised from” several Gentlemen in the District” and a small loan. By the close of summer 1900 The Cottage (sanatorium and preparatory class room) and a swimming pool at its rear had been built on the site of an old kitchen garden and backing onto the Claridge House stable block. OS EJ King Farlow recalled that “the swimming bath had recently been constructed when I arrived at the school [1903] and that was my chief joy in the summer term. I remember that the water was usually pretty foul and unbelievably cold after an infrequent change. Dead mice etc had to be skimmed off the surface before one could bathe but we didn’t mind this.’’
OS Leslie White wrote in a letter to his mother in May 1917 that ‘’we started swimming today. We have a jolly nice bath. It is not very large but it is quite large enough for our school. I think I told you we have a brilliant red costume”. There were covered benches at the western end for changing and a small wooden diving stage at the eastern. In the following decade the School Workshop was kept busy making a new diving stage (1922), duckboards (1929) and a notice board and case for cups.

Known as the Great Deep in those days it was popular for both recreation and competition; every summer pupils tried for certificates awarded by the Royal Life Saving Society. Once Headmaster Geoffrey Garrod had created three day houses (Fenton, Grote, Wordsworth) and opened a new boarding house (Johnson’s) in the mid-1920s inter house swimming competitions could be held. In 1926 RE Tanner was appointed as the first master in charge of swimming. There are a number of swimming cups in the school archives: the School House Individual Swimming and Diving Cup presented by Mrs Banon in 1931; the Florence Hicks House Swimming Challenge Cup presented in 1945; the Personal Improvement Cup presented by Mrs SG Ross in 1973; and the Worshipful Company of Tobacco Pipe Makers and Tobacco Blenders Cup for the Most Improved Swimmer presented in 1974.

By the early 1960s the school pool was beginning to show its age - Headmaster LC Taylor described it as “the first swimming bath built in Britain after the Romans left”. School swimming lessons were mostly taken in the town baths in Eardley Road. Despite repeated attempts to find the money to build a new one (1962 School Appeal, the 1965 Campaign for Further Development, 1973 School Appeal) never enough was raised and the only improvement in the facility was a partial ‘renovation’ in 1972.
In 1984 Headmaster Richard Barker proposed a scheme whereby a pool would be built in partnership with the town: the school would lease some of its land off Solefields Road to the Council, contribute 20% of the running costs and in return expect periods of exclusive use amounting to 12 hours per week. The proposal created a huge local furore with the council being accused of helping to finance an independent school’s facilities with public money; a local referendum convincingly rejected the idea. The following year the council built a new swimming pool on Lady Boswell’s School field; in 2000 the present Buckhurst Lane Leisure Centre opened.

The school pool continued to be used but not primarily for swimming itself. The CCF, Sub Aqua and Canoeing clubs used it for training purposes.

As for the original swimming baths no decision has been made to its future use.

In June 1932, part of the celebrations for the school’s Quincentenary included “ a demonstration of life saving …in the Swimming Bath….filmed by representatives of Pathe Gazette who have provided a copy of the film for the school archives”. Sadly, no copy of this film exists today.

Finally, in 2005, the Sennocke Centre, a purpose built sports complex was built on land to the north of Duke’s Meadow. Included in it was a 25 metre pool, with a high tech UV filtration system meaning sunlight, not chlorine, was required to keep the water clean. Swimming continues to be an integral part of the Sevenoaks School co-curriculum with pupils competing both internally and at county and national levels.