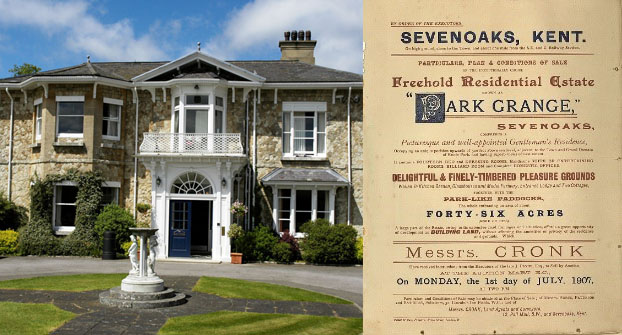 The year 2018 marks several milestones in the timeline of the school boarding house, Park Grange: 1938, 1948 and 1988; a timeline that is peopled with a list of names significant in the history of Sevenoaks generally and, in particular, the school’s history of benefactors and Governors.

The area on which the present house is built was originally part of Sevenoaks Common, emparked in the late sixteenth century. The first owners were John Wildgoose and then Thomas Potkin; the first house built subsequently by Richard Lone. The latter’s descendant, George Lone, was forced to sell the property in 1654 following his involvement in a failed local Royalist uprising. The new owner was Thomas Lambarde and he rebuilt the house (Brick House) and realigned the main road to Tonbridge south, away from its proximity to his front door. The original line can still be traced through the High Street gates of Park Grange, along its driveway and then down to the school Estates Yard and out through Solefields car park to re-join the present road. A red lamp on the gatepost was intended to deter cars from taking the wrong route until relatively recently.

Thomas’ descendant, Multon Lambarde, improved the property, reflected in its new, grander name – Park Place. Jane Edwards, the nineteenth century raconteur of Sevenoaks' history, recollected that around 1805 “it was a very pretty old fashioned stone mansion with a pretty lawn with beautiful flowers and a stately peacock marching about at his pleasure”. Within thirty years, however, Colonel Thomas Austen had demolished half of the property and turned the rest into a farmhouse (Park Farm). It was restored to its place as one of the town’s leading properties in 1869 when Sir George Berkley (Governor and notable civil engineer) built the Kentish ragstone house in the Italianate style we see today – described in 1907 auction particulars as a “picturesque and well-appointed Gentleman’s Residence…[with] delightful and finely-timbered pleasure grounds”.

Many original features of this house, estate and outbuildings are still visible today: the walled Kitchen Garden (Estates Yard), Gardener’s Cottage (Estates Office), Gamekeeper’s Lodging, pigsties and stables (DT Block). Inside the dark wood panelling and marble fireplaces remain in situ in the “cheerful Library…elegant Drawing Room, well-proportioned Dining Room or noble Billiard Room”.In 1911 the estate was bought by Charles Plumptre Johnson, Chairman of Governors and one of the school’s greatest benefactors, and it was he who in 1938 bequeathed the house and estate to the school, although the surrounding meadows had been used as playing fields since 1924.

In February 1948 the school finally took possession of the property on the death of Charles’ brother, Edward. By July of that year the ground floor of the house was being used for much needed classroom space, including a new (and the first) Art Room and Digweed (in one of their first projects) had levelled a football pitch in the grounds. And in September 1948, Park Grange opened as the school’s third boarding house: “when, at 5’o’clock, on Wednesday 15th September, we all stormed into tea like a French Revolutionary mob, we could say that we had started.” The accommodation was for 30 junior boys, up to the age of 14 before they went on to a senior house. “Their cap crest (a white acorn on a shield edged in green and pink) signifies the uncertainty of their future fate – Johnsons or School House – but we can be sure that after a few weeks here they will face it optimistically….”. The first Housemaster was the Reverend JMC Parks.

As the demand for more boarding space increased Park Grange was, in 1960, turned into senior boys’ accommodation and the juniors moved into Lambardes (built on the former tennis court) in 1965. Since 1988, when the school became fully co-educational it has been a girls’ boarding house; an annexe was added in 1992 through the archway in the former stable yard. Today Park Grange becomes part of another phase of the school’s history with the new boarding house, Aisher House, being built on its south lawn.