The Histories of Sevenoaks School 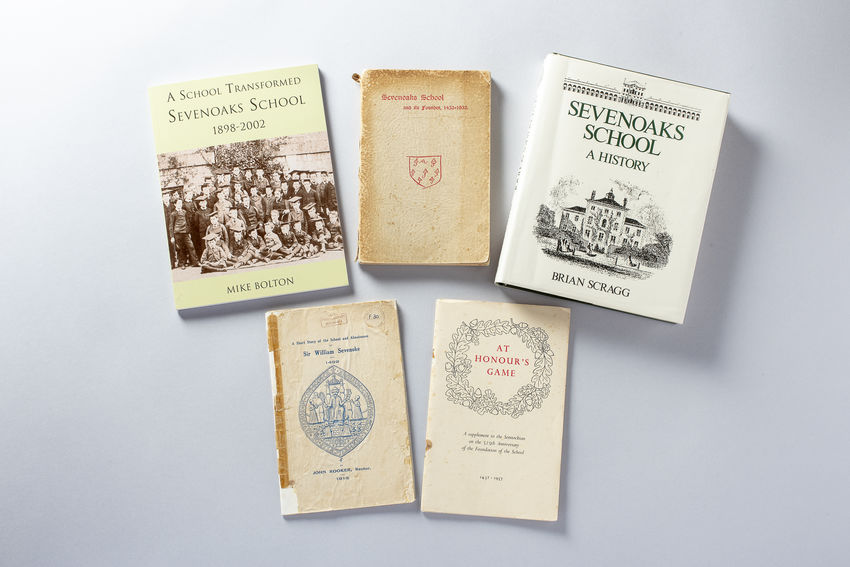 Despite its longevity, written histories specifically of Sevenoaks School are relatively recent publications. It has, though been mentioned in numerous other historical texts over the centuries, the first of which was William Lambarde’s 1576 Perambulation of the County of Kent. His statement “About the latter ended of the reigne of King Edward the thirde, there was found (lying in the streetes at Sennocke) a poore childe, whose parents were unknown, and…named after the place where he was taken up, William Sennocke…” became the standard account of the school’s foundation in 1432, used by all subsequent authors of the event.

“So romantic and satisfactory a tale obviously called for embellishment…quite clearly the story was a fit subject for embroidery…” wrote John Dunlop in The Pleasant Town of Sevenoaks, A History [1964]; the same treatment, of course, borne out in the story of Sevenoke’s friend, Richard Whyttington, in which the basic facts have been twisted into a fanciful tale which has become literally pure pantomime. Lambarde’s account was itself the result of oral tradition, the passing down of a story affected by 150 years of the tellers’ personalities or the culture of the time. The gazetteers and travel guides of the seventeenth, eighteenth and nineteenth centuries further distorted the information about the school’s founder and foundation with an additional word, phrase or date.

By 1744 William Sevenoke was the son of “unnatural parents” [Notitia Monastica, Thomas Tanner]; by 1778 he had been found “in the hollow of a tree” [History and Topographical Survey of the County of Kent, Edward Hasted]; by 1830 he was “a desolate and forlorn orphan in the hollow body of an oak” [A New and Complete History of the County of Kent, WH Ireland];  and by 1834 it was William Sevenoke’s foster father William Rumpstead who was the school’s founder in 1432! [A New and Comprehensive Gazetteer of England and Wales, James Bell].

A few authors brought the story up to date by including events such as the 1631 building of the first stone school house, or the 1725 Chancery case but not until 1913 was the first comprehensive summary of the history of Sevenoaks School produced.  A Short Account of Sir William Sevenoke and of his Almshouses by John Rooker, Rector of St Nicholas, Sevenoaks made a modest assertion in the Introduction that “if a proper history of the school should be written then I hope these notes may not be altogether useless to the historian. Meanwhile they may [at least] serve to keep alive in the town of Sevenoaks the memory of the great man - Sir William himself - and to advance the interests of the Foundations he left us…” which belied the important fact that he made extensive use of original sources.

In June 1932, the Quincentenary of the school’s foundation was marked by a day of celebrations including a visit by the Archbishop of York, tea for six hundred in the gymnasium, a report in The Times and the publication of a new history of the school - Sevenoaks and School and its Founder 1432 – 1932 by J T Lennox. As much as the celebrations themselves this history was intended to promote the ancient lay foundation and traditions of the school and lift its reputation to the ‘first class public school’ headmaster James Higgs Walker wanted it to be. It emphasises William Sevenoke’s ‘glittering’ City career (a merchant-magnate), notable former pupils and well connected Governors.

In 1993 Brian Scragg produced his Sevenoaks School: A History - another good summary of the school’s entire history and including the claim that the school was founded in 1418 and not 1432. That claim, the result of research by headmaster LC Taylor (and since disproved) had first been mentioned in a series of short essays on aspects of the school’s history published in 1957 – At Honour’s Game.

And now, in 2019, the next ‘chapter’ in the histories of the school has appeared with the publication of former Undermaster Mike Bolton’s A School Transformed: Sevenoaks School 1898 – 2002 which is an insightful and in depth look at its twentieth century history from the appointment of George Heslop as headmaster at the end of the nineteenth century through to that of the first female Head, Katy Ricks.

The book is available to buy from the Foundation Office @ £12.99 – please email foundation@sevenoaksschool.org if you would like to purchase one.