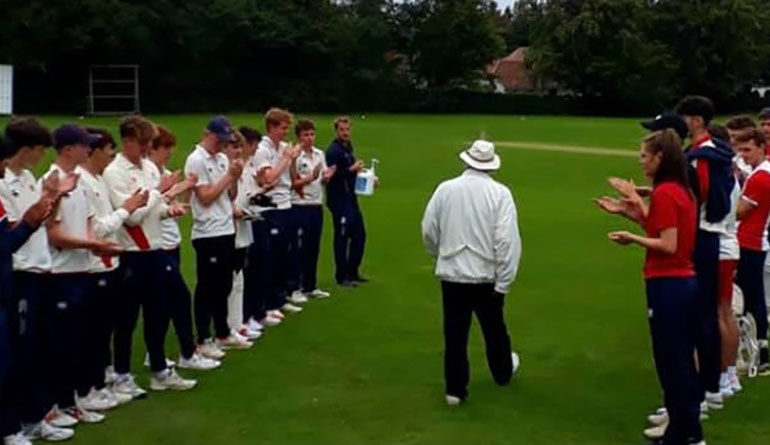 We are sad to share the news that Pip Burrows, an Old Sennockian and an umpire for the school for 50 years, died on 3 November.

Pip (OS 1973) was a great supporter of Sevenoaks School and completed his 50 years of umpiring at Solefields in September when he took charge of the 1st XI against the Old Sennockians.

While Pip played cricket for school, he soon realised his passion lay in umpiring and went on to umpire Sevenoaks cricket alongside a period in minor counties cricket. The pandemic prevented Pip from umpiring during the 2020 Summer term, but when school resumed in September he was able to umpire in a specially arranged match for him and the 2020 Upper Sixth leavers. This match marked the 50th year Pip has umpired at Sevenoaks School, an incredible achievement, showing loyalty and commitment to his roots.

He was a very well-balanced umpire, always fair. If he raised his finger, you really knew the batsman was trapped in front of middle. He was a true gentleman and was never shy of providing you with enthralling anecdotes from the past. His knowledge of local cricketing history was almost photographic and he was incredibly passionate about Sevenoaks and Kent county cricket in a golden era, when the school produced players such as Chris Tavaré and Paul Downton.

As well as umpiring the school’s cricket, Pip was also a qualified football referee and a minor counties cricket umpire, and had managed a local football team since the early 1970s, leading teams which gained an impressive list of trophies in cup competitions and several league championships.

Phillip Burrows attended Sevenoaks School from 1965 to 1973, and began umpiring while still at school. Outside the school, he managed St Lawrence (Stone Street) FC (the Saints), where a number of our Old Sennockians have played and still do to this day. During the nearly 50 years under his management, the teams won an impressive list of trophies in cup competitions and several league championships.

Last season St Lawrence finally won the one trophy that had so far eluded Pip – the Sevenoaks & District Football premier league champions’ cup, but the other trophy that made him even prouder is the one that stands beside it in his home: the Sevenoaks & District Football League fair play trophy, which his team has won three times in the last four seasons.

As well as being a football manager – and occasional player, particularly when one of the teams were short – Pip was also a qualified football referee and a minor counties cricket umpire. He loved cricket, and as a pupil at Sevenoaks School was in the same year as eventual Kent and England players Paul Downton (who Pip also persuaded to play football for St Lawrence) and Chris Tavaré. He joked that with such talent already ahead of him in the batting line-up he was better off becoming an umpire. In later life he still found time to don the whites to play for St Lawrence cricket club.

Pip’s association with local football started when, not long after he left school, he managed a team that played in Otford in the early 1970s. Many of the players were former schoolfriends from Sevenoaks and they formed the nucleus of the squad that Pip eventually united with St Lawrence in the mid-70s.

In those days the St Lawrence changing room was an old wooden cowshed with a mud floor in the corner of the ground. It had no electricity and just one sink with a cold tap, which made trying to get dressed after a match on a cold dark winter’s evening a voyage of discovery. Eventually, and not before time, the football club started sharing the cricket club’s changing room. There is nothing left of the old cowshed, but if you search in the bushes you’ll find remnants of the old sink.

Despite these basic facilities, Pip still managed to attract talented players to the club and the teams he started to put together soon became a force to be reckoned with. Visiting clubs who thought they could turn up and ‘turn over’ this small village club were in for a shock.

In the 1970s and 80s Pip’s teams won a host of trophies. Nick Cobb, one of Pip’s signings from his Sevenoaks School days, once scored more than 80 goals in one season in all competitions. An incredible feat.

While some village clubs were forced to close because of lack of interest and players, St Lawrence, under Pip’s management, went on to form a reserve side which is still playing in the Sevenoaks & District League. The amount of organisation and admin work Pip carried out – particularly phoning all the players in the days before email and smartphones, and even marking out the pitch himself – was quite extraordinary.

However, what many of the players are not aware of is the other work Pip did behind the scenes, not only generating income for the club through things like shirt sponsorship but also giving up his time to serve on the Sevenoaks & District Football League committee where he did a tremendous job representing the interests of St Lawrence.

In the early days of his management St Lawrence team meetings were held at the former Rose & Crown pub in Stone Street and ‘training’ – this word is used in the loosest sense – was held in the car park. When the pub was turned into the Snail Restaurant, the club moved down the road into The Padwell Arms which was the scene of many a victory celebration. Sadly, this also closed down and over the years he set up other team HQs in The Bucks Head, The Five Bells in Seal, and the former Golding Hop in Plaxtol.

A few years ago, Pip was diagnosed with cancer. Despite this battle, and with the help of Jonny Herbert who stepped into the first team manager’s role, Pip remained the driving force behind St Lawrence FC. Even when his treatment left him very weak Pip would still turn up on match days. Right until the end he could be found sitting in his car watching his teams play.

Pip’s achievements with St Lawrence will remain on record but there is an unseen legacy which cannot be overlooked. I was lucky enough to be part of the early days of Pip’s management when he brought amazing success to the club. He created what can only be described as a community feel within St Lawrence that still exists. The people I started playing with more than 40 years ago remain good friends to this day and we have Pip to thank for these enduring friendships and the fond memories we share.

The pandemic means St Lawrence players, supporters and his other connections in local sport, cannot give Pip Burrows the send-off he truly deserves, but plans are already being discussed to organise a get-together in his honour when conditions allow, in order that his amazing contribution to local sport can be celebrated.

Summers at Solefields will never be the same again. Rest in peace, Pip!

* This tribute was written by Frank Baldwin, with additional reporting from Sevenoaks School archives and the PE & Sport department

If anyone has any memories of Pip, please email os@sevenoaksschool.org