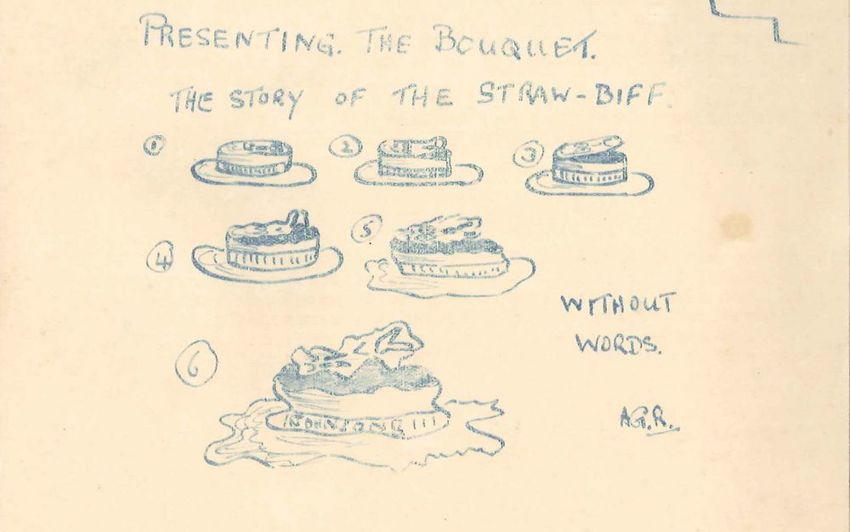 The origin of the name ‘Biff’ is unknown, whether a reference to one of the many dictionary usages of the word  -  to lob or throw, to strike or land a blow, a card game trick, a northern term for a cigarette, the word for ‘ear’ in the Welsh valleys – or based on some quirky Sevenoaks tradition or event.

It first appeared as part of the Sevenoaks uniform around the turn of the last century; in 1917 it was known as a ‘strawyard’ but its more common colloquial name was in use certainly by the mid-1920s when one of the first editions of the Johnson House magazine Percipe Johnsonia  carried an illustrated lifecycle of a Biff.

Straw boaters originated in Luton in the mid nineteenth century, based on the flat caps of French sailors; first an item of children’s headgear they quickly became popular with adults engaged in the new leisure activities of sailing and boating. From the 1880s they were adopted by boys’ schools, both in Britain and across the Empire, as a de rigueur item of uniform – less formal than the top hat but classier than a cap. Some schools wore it just in the summer, but others, including Sevenoaks, wore it all the year round. One Old Sennockian recalling his days at the school in the 1940s wrote that 'we wore straw boaters known as Biffs reminiscent of Henley Regatta on a warm summer day. They were our headgear throughout the year and were very good at keeping the snow out of one’s eyes during a blizzard'.

It was a compulsory item of uniform by the time OS Leslie Wright was a boarder in 1917: '…on Sunday we are supposed to wear top hats in the winter and strawyards in the summer'. The 1925 Prospectus stated that 'the wearing of the school cap or straw hat with the school badge is imperative'; in 1954 'all boys are expected to wear grey flannel suits or grey flannel trousers and the school blazer…together with the school cap or straw hat'. By 1965 the requirement had been slightly relaxed and 'an attempt has been made to keep the clothing list reasonably simple. Suits of dark grey are worn or a blazer with grey flannels. Biffs are necessary for all seniors but optional for juniors'.

Biffs were decorated with either house or school colours and sold by Horncastles, the school outfitters in Sevenoaks High Street, which is still there today.

By the middle of the twentieth century, the straw boater had lost its popularity with the general populace as an item of headgear being associated far too readily with public school children or vaudeville acts. As an item of school uniform it limped on in existence until the late 1960s when, in line with the ubiquitous reaction against all signs of privilege and establishment in that decade, it was abandoned by most schools.

At the unveiling of the statue of William Sevenoke outside School House in 1961 by the Bishop of London and other dignitaries, the covering flag fell away to reveal the esteemed Founder sporting a biff at a very jaunty angle. By the end of the decade the new School Council (pupil led) had asked for riddance of the Biff as a uniform item; it happened gradually – first the senior school, then the middle school and finally the juniors by the mid-1970s.

Such was the iconoclastic item of Sevenoaks uniform that the Biff had become it inspired literary contributions in school publications:
Straw Biffs (with apologies to Mr Browning) by Example
And out of the House the Hats came tumbling,
Great biffs, small biffs, clean biffs, dirty biffs,
Whole biffs, split biffs, bent biffs, inky biffs…some with badges for their token
Some had holes and most were broken And two by two they went advancing
Down Oak Lane the heads went dancing…Until they reached the School House portals
Wherein all plunged and perished

And the 1951 Sennockian poem “Lines to a Biff”
Friend of old, Farewell I bid
Thou and I must part for ever
Thou wast snatched from off my head –
Vain to save my best endeavour:
Long my aching brow had borne thee
Whom no magic can restore
Long my aching heart shall mourn thee
Thou and I may meet no more
I with heart and hand unflinching
Strove to save thee from the lynching
Which the gate-crowd gave to thee –
Not a hope: for torn and tattered
To the four winds thou wast scattered
Ere I sought to save thee