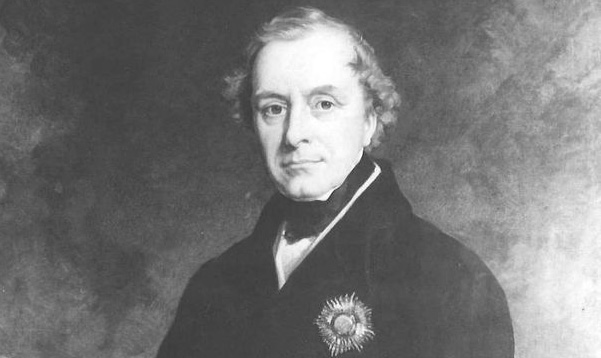 When a new house was opened at Sevenoaks School in 1933 “due to the belief that it is easier to maintain an efficient corporate spirit in a Day House of forty rather than fifty boys” [Sennockian December 1933] the name chosen was ‘Hardinge’ in tribute to one of the school’s most famous alumni: Field Marshal Henry Hardinge, 1st Viscount Hardinge (1785 – 1856).

Henry Hardinge was born on 30th March 1785 to Reverend Henry Hardinge, vicar of Wrotham and his wife, Frances. The family background was gentry with ancestors and relations holding important government, judicial or clerical posts. Henry’s paternal grandfather was Nicholas Hardinge (1699–1758) who had been during his career Clerk to the House of Commons, Secretary to the Treasury, MP and Latin poet; his grandmother’s father had been Sir John Pratt (1657–1725) who had twice held the office of Lord Chief Justice of England and been appointed interim Chancellor of the Exchequer in spring 1721.

Reverend Henry Hardinge left Wrotham for the wealthy incumbency at Stanhope Co. Durham shortly after Henry’s birth; the latter spent his early years here and attended Durham School between c.1794 – 1797. However, the increasing size of the family (eventually nine sons and four daughters) was in all likelihood the reason why Henry junior was sent, with two of his sisters, to live with their maiden aunts, Julia and Caroline Hardinge, at The Grove in Seal, Kent. From here Henry attended Sevenoaks School 1797 – 1799 under headmaster Reverend Dr Gervase Whitehead.

There he formed a friendship with John Woodgate of Riverhill House; they remained friends all their lives and fought together in numerous military campaigns. “John was sent to school at Sevenoaks, a big boy for his age; and [on] his first day there some of the other boys had got hold of little Hardinge and were roasting him before the fire, according to the genial custom of the times, Though only a ‘new boy’, John made such a fuss that Hardinge was released; and to attest his gratitude, carved him a small wooden boat, for many years preserved in the family” [Woodgate Family Papers, p.277, 1910]. Henry’s aunts used to make him hang from a door in an attempt to increase his short stature.

Henry Hardinge left school in 1799 aged fourteen, joined the army (Queen’s Rangers) and was immediately sent to Canada. In 1806 he returned to England to spend a year studying at the new Royal Military College. When the Peninsula War broke out (1807) between Napoleon Bonaparte’s forces and the Allied powers, Hardinge returned to the field and spent the next seven years fighting under the Duke of Wellington. He served  as a Divisional Commander , was wounded three times, won ten campaign medals and was awarded a military KCB  for achievements such as that at the Battle of Albuera when he is said to have “turned the tide” of the entire war by his actions [History of Parliament, 2009]. The Duke of Wellington paid a visit to Sevenoaks in March 1815 to review the yeomanry and doubtless visit his close friends residing in the area – Sir Henry Hardinge in Seal and John 1st Marquess Camden at Wilderness.
Within three months of the visit, Napoleon’s escape from Elba had led to the resumption of hostilities on the continent. Wellington seconded Hardinge to the staff of the Prussian army and it was with them that he fought at the Battle of Ligny on 16th June 1815.  During the battle Hardinge’s left hand was shattered by enemy fire; bandaged up he carried on fighting and it was not until the evening that his lower arm was amputated by Wellington’s personal surgeon. Two days later the Battle of Waterloo was fought but Henry Hardinge was not present.

In 1818 Hardinge returned home and spent the next 26 years as an MP and cabinet minister; Governor General of India between 1844 – 1848 he was created Viscount Hardinge of Lahore and King’s Newton Derbyshire shortly before his return. In 1852, on Wellington’s death, he became Commander in Chief of the British Army responsible for directing the Crimea campaign; and in 1855 was given the rank of Field Marshal.

Henry Hardinge always remained connected to the Sevenoaks area where he had grown up; on marriage in 1821 to his cousin, Lady Emily James, he bought the country house, South Park in Penshurst where they brought up two sons and two daughters. He died there on 24th September 1856 following a stroke and is buried in Fordcombe Church.

Queen Victoria wrote on his death that “no sovereign ever possessed a more honest and faithful councillor, or a more loyal, fearless and devoted servant”. An historian of his private papers  described him as “a legend, the symbol of calm courage amidst the storm of war; a man steadfast in danger, patient in council and in his personal relationships warm and loving, extending his generous quality of heart to all with whom he came into contact” [Sennockian Easter 1958]. He is the only Sevenoaks School alumni to be given his own ‘Honour Board’, formerly in the Johnson Hall but now in Claridge House waiting room alongside a print of his portrait.