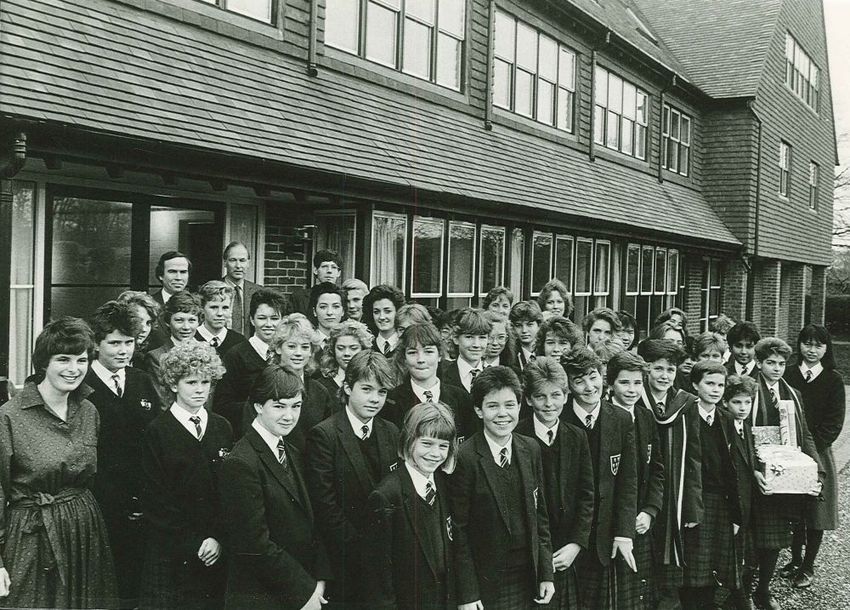 In April 1929 the Sennockian reported on a school debate for which the motion was "The power of women has increased, is increasing and ought to be diminished". Opposing arguments, led by James Higgs Walker’s view that the proof of female brain power was in the fact that the majority won crossword puzzles were no match for the supporting arguments which included the fear that “in Parliament at critical moments women would be powdering their noses instead of paying attention to the discussion" and the motion was carried by 15 votes to 12. Fifty five years after that debate Sevenoaks School became fully co-educational and in 2016 we celebrated the 30th anniversary of its first purpose built boarding house for girls: Sennocke House in the grounds of the Girls' International House and opened by Lady Sackville in January 1986.

Sevenoaks School appointed its first female Assistant (Governor) in the seventeenth century - Margaret Boswell – but apart from her contribution there was no tangible female presence in the school, apart from headmasters’ wives and domestic staff, until the turn of the twentieth century. In 1914 the upset of the First World War caused a radical change on the staff as female teachers took over the duties of masters gone to fight in the trenches, including George Heslop’s own daughters, Faith and Evelyn. Once established, this female presence not only remained in the school but gradually increased and widened its remit and in 2002 Sevenoaks School appointed its first female Head – Katy Ricks.

That he should raise his Biff was expected but it remained until relatively recently a punishable offence for any boy to converse with any female in the street who was not his mother. However, within school boundaries girls began entering the consciousness of pupils in particular through links with the local girls’ school, Walthamstow Hall. The first recorded mention of this linkage was in 1923 when the Sennockianreported that it had been "by kind invitation of the headmistress of Walthamstow Hall [that] a party of boys were privileged to be present at a lecture on The Principles of Greek Balance given by Miss Diana Watts. It was an evening of pure delight".

It took the effects of another war to instigate the introduction of girls onto the Sevenoaks pupil role. The destruction of the science block at Walthamstow Hall in September 1940 caused sixth form girls wanting to study Chemistry to come up to the Swanzy Block labs; in reciprocation, a Biology lab in a converted dormitory in Hollybush Lane was made available for Sevenoaks boys.  These ‘Co-Eds’ pupils and the sharing of certain classes between the two schools continued after the War; by the 1960s there was regular co-operation with Sevenoaks and Walthamstow Hall pupils working together in a number of areas, most particularly in local VSU activities.

Looking to progress the school’s development in the 1970s, headmaster Alan Tammadge chose to introduce girls into the Sixth Form. “We are expecting their influence to be disproportionate to their numbers and to be wholly for the good, civilizing, educational, aesthetic" he wrote in the Annual Review of 1975/76. A year later, the conclusion in the same report was that "attractive, modest, mostly discreet and teachable they were assimilated so well that it was hard to think of them as 'experimental.'”

Not all were so positive about the move. Within the school community there were fears about the "shrinking of the pool of available male talent” on sport, (still overwhelmingly male) staff who had only taught, and been taught, by men and also about girls' perceived reactions to "schoolmasterly sarcasm" [Sevenoaks School A History, Brian Scragg] as well as the more practical considerations of lavatories, changing rooms and uniform. The editorial of the Sennockian after that first year acknowledged that "when the girls arrived they presented such a shock to our all-male nervous system that the boys, for the first two weeks, seemed joined in a telepathic conspiracy to pretend that they weren't there...".

And the girls too found that they had to adjust - “to the confidence and certainty of male culture…to the exuberant physical activity of the younger boys and the detached self-assurance of the older ones… the school doesn’t know whether to treat the girls as ladies or equals…” [Sennockian 1979]. Jane Higgins, one of those first girls, observed that "one of the most important changes for me is that I find that I am working a good deal harder and more consistently at Sevenoaks...this stems more from the school itself than the A Level course"; she particularly enjoyed the "variety of other activities" offered [Sennockian1977].

The uncertainty  proved short lived:  “Girls do the same work, play squash, make bookshelves in the workshop and shoot on the rifle range, are elected prefect and generally demonstrate that they are equal and different, which is the way it should be" [Annual Review 1977/78].  By the beginning of the 1980s there were over a hundred girls in the Sixth Form. Almost as soon as the day girls had been enrolled, applications were made for female boarding places and in response the Girls’ International House was opened in 1977. John Adams, its first housemaster , recalled that the girls "say please and thank you and the house smells of talcum powder rather than unchanged socks" [Annual Review 1977/78].

Although it took another seven years to achieve, the next logical step for the school’s development was the opening of admissions to girls into the lower classes. Brian Scragg [Sevenoaks School A History] described it as the “most momentous step taken by the school" since becoming independent in 1946. However, not all were as enthusiastic as headmaster Richard Barker over the proposed move and a fierce debate of opposition raged throughout 1983. "Strong male societies - regiments, ships, teams, squadrons and schools - sustain men in hard times, and there are plenty of those to come in this country" was the view of one  Old Sennockian [Ibid]; and a current parent said that as a “mother, who had been to a co-ed school, [she] thought that younger girls would do little in class other than pass round love letters" [Ibid].

Finally, after a diligent consultative process the Governors concluded that “the decision to become fully co-educational will prove stimulating and beneficial for both the school and the community" [Sevenoaks School A History, Brian Scragg]. And so in September 1984 thirty six girls entered the school at ages 11, 12 and 13 (to join the 110 already in the Sixth Form). Included in this intake were thirteen boarders and they first lived in 38 High Street. Additional accommodation at the recently closed Winchester House prep school was requisitioned in 1985 when boarding numbers rose to forty; further increasing numbers led to the amalgamation of “Winnies” and High Street boarders the following year in Sennocke House.