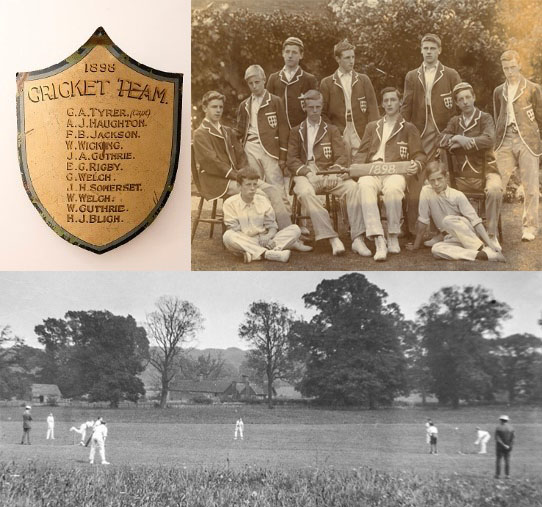 One of the most treasured artefacts in the Archives is a large metal shield - slightly battered and rusting around the edges, it has etched on it the names of the 1898 First XI cricket team.

These shields were (in the late nineteenth and early twentieth centuries) annual honour boards created for those in the school football and cricket teams and they lined the walls of the 1890 assembly hall and gymnasium (now the sixth form common room on the west side of Swanzy Courtyard). None appear to have survived the transition into the new Johnson Hall in 1934; this is the only survivor.

What makes this shield special too is that there also exists in the archives both a photograph of the 1898 team and a detailed account of the matches they played that summer and a description of the team players in the summer issue of the Sennockian.

The First XI that played in the summer of 1898 did so under the new headmastership of George Heslop who had moved from Sandbach School, Cheshire in April. There he had built up the school’s reputation and numbers to such an extent that when he came south a number of his pupils came with him, “particularly those who had made names for themselves in sport” OS EJ King-Farlow recalled. This is reflected in the make-up of the 1898 Eleven: nine were from Sandbach and only two were Sevenoaks ‘home’ boys. On the occasions when some of the team members were unable to play the numbers were made up by either the headmaster himself or two of the younger masters, WH Counsell and SGW Stephenson.

Cricket at this time in the school’s history was played mainly on the pitch at the School Lands in Hollybush Lane, although some matches did take place on the Vine.

The first match played that 1898 season was away, against the Royal Naval School, Eltham on May 18th. “The innings of the school were not very creditable owing to the fact that it was the first match of the season and we had very little practice” and their opponents won the match by 63 runs to 55. The Sevenoaks team was more successful in their next match, on May 25th against the Skinners’ School, on the Vine, when they won by 56 runs to 37 - a combination of “good” bowling and “smart” fielding.

Fourteen more matches (including return ones) followed before the school term ended in July. The school played against a variety of teams from other schools (Maidstone and Cranbrook Grammar Schools), local clubs (Rockdale CC, Shoreham CC and Brasted CC), local Old Sennockians (D L Satow’s XI) and organisations such as the YMCA and the Union Bank of Australia. The competency of the northern contingent in the team clearly showed and overall the school were victorious 11 times, losers 4 times and drew once. A heavy defeat against Brasted CC on 11th July was blamed not on the players but on the hot weather meaning that “our fielding was not up to the mark”.

George Tyrer (Captain): “a good bat and has scored well. Is a very respected bowler but apt to hurry the pace. A safe catch and very hard working in the field. As captain has kept the team well in hand and done much for the cricket of the school.”

Alfred Haughton (Vice-Captain): “A good bat on a wicket that suits him. Much improved in his play on a fast wicket. Far bowler and supplies the field well with catches. Good field but has off days.”

Frank Jackson: “Much improved as a bat. Has kept wicket fairly well and has nearly cured himself of the habit of kicking the wicket to call its attention to the ball being thrown in.”

James Guthrie: “Probably the most improved bat in the team. Good field and catch. Rather slow, however, in getting after a ball.”

Ernest Rigby: “Hard hitter when he gets started. Keen and hard working in the field.”

Charles Welch: “Very nervous as a bat and hardly does himself justice. Erratic in the field.”

James Somerset: “promising as a bat and field.”Wilmot Welch: “Much improved this term. Ought to be useful next season.”

Herbert Bligh: “Very moderate bat. Wants any amount of practice in the field.”

As a postscript, born as they were around 1880, the boys in this team largely swerved the horrors of the First World War being considered too near the upper age limit of 38 years to fight. Of those that did take part in the conflict all survived except for Alfred Haughton who was killed in June 1915 whilst examining the state of the wire in front of a trench during the Second Battle of Ypres.