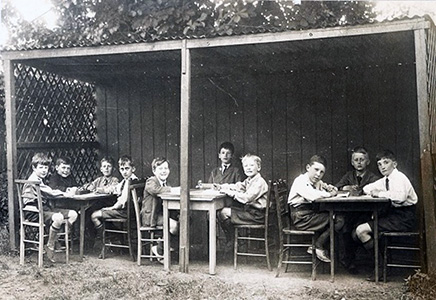 Preparatory Schools became a feature of the national educational system in the early nineteenth century, preparing young boys for entry to the major Public Schools at the age of 13. For much of that century, Sevenoaks Grammar School performed this preparatory role for some of its pupils, alongside its main secondary education provision for others to the age of 18. However, by the start of the twentieth century, under new headmaster George Heslop, the school wanted to concentrate more on the latter and less on the former and therefore opened its first independent but linked preparatory school provision in 1900. Assistant Master Samuel Stephenson took over the running of The Beacon in St John’s Road when its former occupant left to start afresh as The New Beacon on a site on the Montreal Estate and the Salmon Guides to Sevenoaks for the next fourteen years have a separate listing for “a preparatory school in connection with Sevenoaks School”. It was a relatively short-lived venture – by the start of the First World War the premises was listed as a generic “preparatory school for gentlemen’s sons”, and the names of Beacon pupils were no longer included in the main Sevenoaks School pupil lists.

It is well known that George Heslop struggled to cope with the tribulations caused by the conflict both in terms of personal cost and home front privations and specifically this is reflected in preparatory provision appearing to have ceased in the school, or at the very least becoming an ad hoc provision for younger brothers of older boarding pupils should their parents be abroad. However, in April 1919 Geoffrey Garrod was appointed headmaster of the school and brought with him a wife and young family, including a four year old son; in order to educate the latter, Margaret Garrod decided to form a preparatory class. According to the 1920 Board of Education Inspection Report, there was by March of that year a “kindergarten class of 21 children, with an age range of 5-9…conducted in the school buildings”. Old Sennockian Frederick Pearce recalled that when he “joined the school [in September 1920] … it had its own Prep., housed in two rooms in the then Sanatorium building (now known as the Cottage)”. The Cottage had been built in 1900 as the Grammar School’s Sanatorium. The preparatory class was situated in two rooms on the ground floor; upstairs was the Sanitorium and the School Porter’s rooms. The boys took lunch in the main School House.

By September 1921, the kindergarten class had become formally known as the Preparatory School, officially linked to the Grammar School. By the end of that term it was clearly expanding rapidly with 35 boys in it and its first headmaster appointed – the Reverend Cyril Holland. Holland had taught at the Grammar School previously (1911 – 1913) before carrying out parochial work and seeing service in the First World War as an Army Chaplain. He returned to Sevenoaks in September 1921 to teach Latin and Divinity and was given “a hearty welcome” as “an old friend of the school and a French expert”. The Prep School continued to be administered by Mrs Garrod assisted by Mrs Mary Holland; according to Prep School alumnus Ray Barber, the latter “had a very fiery temper… of whom we were scared stiff”. Other Grammar School masters divided their time between both establishments in particular James Moss and Ronnie Marchant.

In April 1922 a local newspaper advert announced that “owing to the growth of the school”, from the following term the Prep School would move to its own premises at 4 Vine Court Road. Purchased by the Hollands as their own residence from the Church of England Waifs and Strays Society who had recently vacated the property, and now described by a contemporary prospectus as a ‘Home School for Little Boys’, they moved in with 35 boys and a ‘lodger’ – Ernie Groves. The aforementioned prospectus named Mrs Holland as ‘the Principal’ with “the general discipline of the house…under the direct supervision of the Rev CG Holland”; applications were still to be made through Mrs Garrod in the first instance.

Despite moving to the new premises the Prep School continued to maintain links with the main Grammar School. In his 1923 Speech Day address “Mr Garrod mentioned the steady but excellent progress made in the Preparatory School and advised parents to send their young sons to this school, where the ‘groundwork’ was thoroughly taught”. Boys from the Prep School took part in the annual main school drama productions; used the school swimming pool and shared staff. In the main, Prep School pupils went on to Sevenoaks; Fenton was traditionally their house.

In 1925 the Garrod’s left Sevenoaks for Belfast; the Holland’s continued to run the Prep School for another 3 years until in 1928 they too retired due to Cyril’s poor health. 76 boys were now on the roll; with the arrival of new headmaster, Miles Jukes, the direct links with the Grammar School ended.

Pictured above: A Prep School classroom in the garden at Vine Court Road 1925